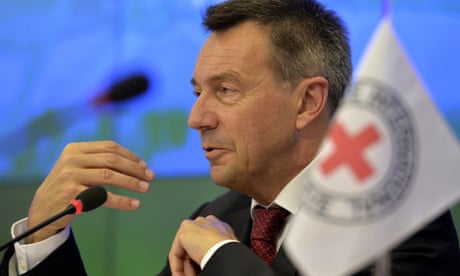 Growth of violence in cities swollen by urbanisation has created challenges to which international community yet to respond, claims ICRC head Peter Maurer

The world’s cities are becoming increasingly overcrowded and violent, with conflict and the increasing prevalence of urban gangs armed with military-grade weapons creating development challenges with which the international community is struggling to cope, according to the president of the International Committee of the Red Cross.

Modern warfare – in all its splintered, increasingly urban messiness – has altered the humanitarian space, said Peter Maurer, changing the world of emergency relief beyond recognition.

The sight of ICRC trucks ferrying relief to thousands of displaced people in the countryside is no longer the norm; today, bombs fall on cities, where thousands still live. Humanitarians need to reach these people and repair damaged services, like water systems, while simultaneously negotiating with different armed actors, Maurer explained.

“We see a transformation of warfare from the big armies and battlefields in open spaces to a fragmentation of armed groups and smaller armies, which move into city centres, which increasingly become the theatre of warfare,” he said.

“It’s not by chance when we look at the 15 largest conflicts in the world, in which ICRC is active, the emblematic names that come to mind are Aleppo, Homs, Luhansk, Donetsk, Maiduguri, Aden.”

As the terms of humanitarian engagement have altered, so too has the scale. Turbo-urbanisation has led to swollen populations, said Maurer, creating unprecedented levels of urban vulnerability.