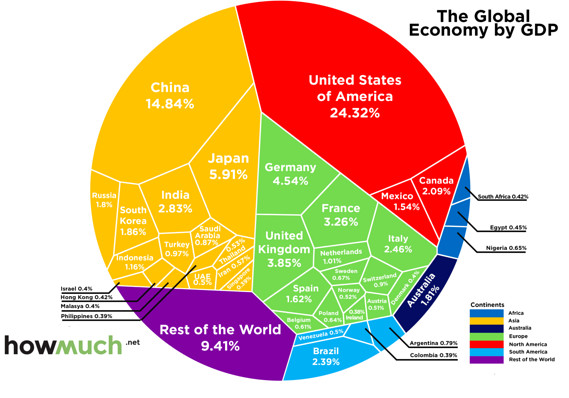 «The Absolute Dominance Of The U.S. Economy»

Despite all the drama with Trump, fear of economic issues, etc. America’s status as an economic superpower is intact.

The chart above tallies the GDP of nations and represents each nation’s GDP as a percentage of the global economy.

The U.S. economy is by far the largest at over $18 trillion.

By Continent, Asia overshadows North America and Europe.  Yet, China (America’s closest competitor) only has a GDP of approximately $11 Trillion.

There is a vast difference between the «Have» and «Have Not» countries.

For example, South America’s four biggest economies account for 4% of the global GDP, while Asia accounts for 33.84%.

Impressive, but I suspect that America’s success (globally) engenders the same resentment that the «One-Percent» get here in America.