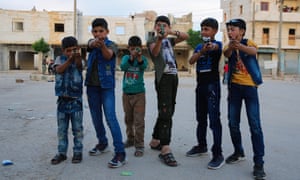 Wars without end: why is there no peaceful solution to so much global conflict?

A new study shows that 60% of the world’s wars have lasted for at least a decade. From Afghanistan to Libya, Syria to Congo DRC, has endless conflict become normalised?

Libya’s civil war entered its 7th year this month with no end in sight. In Afghanistan, conflict has raged on and off since the Soviet invasion in 1979. America’s Afghan war is now its longest ever, part of the open-ended US “global war on terror” launched after the 2001 al-Qaida attacks.
Yemen’s conflict is in its sixth pitiless year. In Israel-Palestine, war – or rather the absence of peace – has characterised life since 1948. Somalis have endured 40 years of fighting. These are but a few examples in a world where the idea of war without end seems to have become accepted, even normalised.

Neat and tidy endings, even if sometimes illusory, are rarer these days. According to a survey published last week by the International Institute for Strategic Studies, 60% of armed conflicts have been active for at least a decade and peace-making prospects globally are in decline.

Today’s wars are mostly undeclared, undefined and inglorious affairs typically involving multiple parties, foreign governments, proxy forces, covert methods and novel weapons. They are conducted without regard for civilian lives, the Geneva conventions regulating armed conflict, or the interests of host populations in whose name they are fought.

Great moral crusades, famous causes and genuine ideological struggles are few and far between. Modern wars are mostly about power and treasure. And they go on, and on, and on.

Libya is a classic case of a state of chaos deliberately fed and manipulated by external powers, in this instance Turkey, Qatar, Russia, Egypt and the UAE. Here, as elsewhere, rival rulers claim to be upholding order or fighting “terrorism” while, in reality, they seek to extend national influence and economic advantage. As long as these aims remain unmet, they show scant interest in peace.

Ambitious states have always sought to dominate neighbours in the way China, for example, is doing now. One reason this happens more frequently today, and more anarchically, is declining American engagement.

In the Middle East and Africa, the US – no longer a global policeman – is focused on supporting Israel, squeezing Iran and selling arms, to the exclusion of almost all else. In Asia, it is in retreat.

Why is the world at war?