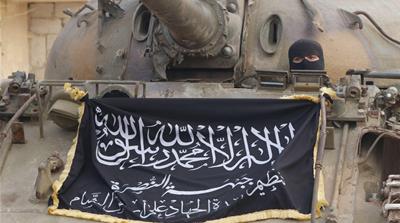 It is almost four years since the Syrian uprising began amid the optimism of the Arab Spring. It has degenerated into a savage civil war that has killed over 200,000 people and shattered the lives of millions more.

It has also seen thousands of young Muslims from Europe, Australia and elsewhere travelling to Syria to fight – many joining competing groups such as the Islamic State of Iraq and the Levant (ISIL) and Jabhat al-Nusra, al-Qaeda’s Syrian arm, which, as well as seeking the overthrow of the Assad regime in Damascus, are locked in their own intense battle for the hearts and minds of the local population.

For this exclusive People & Power report, Danish filmmaker Nagieb Khaja went to Syria to speak to Western fighters and to one of Jabhat al-Nusra’s senior figures – the Australian / Egyptian cleric, Abu Sulayman Muhajir. In this remarkable film, made possible through long and patient negotiation for access, Nagieb finds out why young foreign Muslims are being drawn to the conflict in Syria, explores the reasons behind Jabhat al-Nusra’s fierce rivalry with ISIL and examines the implications of these developments for global security.