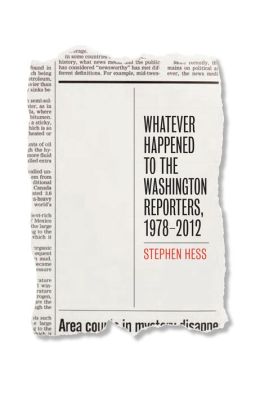 In his latest book, Whatever Happened to the Washington Reporters, 1978-2012, Stephen Hess follows the trail and whereabouts of 450 Washington reporters he first surveyed in 1978. He located 90 percent of them in four foreing countries, 19 U.S. states and the Washington area, and interviewed 283 of them.

Brookings’ blog Up Front offered on August 7, 2012 video snippets from Hess’ interviews and featured Hess’ recollections, a treasure of anecdotes and lessons for journalists, journalism students and professors, and anyone interested in the so-called fourth power covering the capital of the world’s main and, probably, today’s only superpower.

Other journalists in the same blog:

August 7
Brit Hume: The First Day in the Newsroom

August 21
Steven V. Roberts: Coming from a Family of Writers

August 28
Linda Greenhouse: Breaking into Journalism as a Woman

October 2
Bernard Kalb: From Covering the U.S. State Department, to Working Inside It


Well deserved, Hess’  book received many, most of them positive, reviews. James Rodes wrote in The Washington Times:

If mainstream journalism is viewed with increasing skepticism by the general public — and it is — then one might argue that while the reporters have stayed the same, the story they need to be reporting has changed dramatically. Most visibly, that change of story has been from the almost total emphasis on political process that existed when I began in this town 45 years ago to a greater hunger for insight into what is happening in the complex arena of economics.

What once had been relegated to the back business pages is now of front-page concern to most citizens. The specialization of financial reporting services — again, Reuters and Bloomberg and a host of other online services — requires an equal specialization and expertise from the men and women who do the reporting.