This tweet from El Mundo’s correspondent in New York Eduardo Suárez pushed a button in my head (or heart, don’t know for sure) on April 29  and encouraged me, first, to enter the Columbia School’s web looking for the video, audio or text of Tom Wolfe’s lecture (failed, I found only tweets) and, second, back it with the original work and some of the best essays written on Wolfe and the rest of the New Journalism flock. Here I think the effort was worth, although only you may judge. 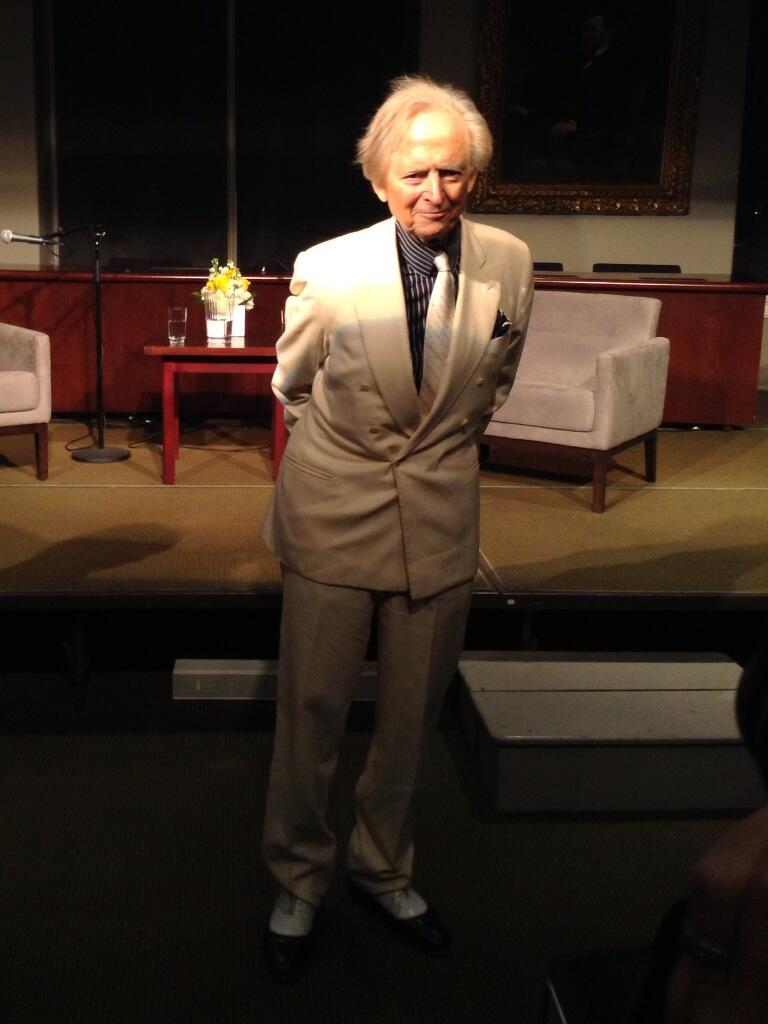 Rene Auberjonois read from some of Wolfe’s work, then Wolfe chatted with Richard Wald.

Here, in chronological order, are my Tweets (and re-Tweets) from the event

The great Tom Wolfe is here giving a talk at @columbiajourn. I’ll be tweeting. Now reading from his works: Rene Auberjonois. #cuj13

Tom Wolfe: academic training in history, etc. helped in journalistic work. “The Right Stuff” not about flight; about status system.

Tom Wolfe: made main character in “Bonfire of the Vanities” a writer like him so he didn’t have to do too much additional research.

Tom Wolfe: Research & reporting key in novels. Advice to young writers: “Get out of the building.” Bizarre world out there.

Tom Wolfe: Essence of reporting: talking to strangers. Many British writers “too upscale in their visions of themselves” to do so.

Tom Wolfe: I’m always surprised at the questions people are willing to answer. Thinks of it as “information compulsion.

Tom Wolfe: wrote first novel at 54 and didn’t intend to write another one. But was “swayed by all the fuss.”

And that’s it. Tom Wolfe talk at @columbiajourn is finished. For the record: yes, he was wearing cream colored suit. 🙂

Whatever Happened to the New Journalism? is Bill Beutler’s  unpublished Master’s thesis at Columbia University Graduate School of Journalism featuring interviews with its leading practioners. Written in 1984, the author has downloaded the study in his web. It starts defining the object.

Tom Wolfe (The Right Stuff, 1979), Gay Talese (Thy Neighbor’s Wife, 1980), and Hunter S. Thompson (The Curse of Lono, 1983) still use fiction techniques in their nonfiction books. But younger writers in Esquire and Rolling Stone magazines, where the style flourished in the ‘60s and early ‘70s, have shifted away from what was called the New Journalism. Fiction techniques have not been abandoned by these writers, but they are being used sparingly and less flamboyantly.

Writers and editors offered several reasons for the New Journalism’s decline in a recent series of interviews. Talese said that young journalists entering the profession in the late ‘60s were more interested in television and advocacy journalism than in stylish writing, and that both of these deemphasized the thorough reporting required by the New Journalism. “I don’t think they young people who came out of journalism schools, or any kind of schools, in the 1960s had the faintest idea of what reporting is,” he said. “You can see that in the magazines. There’s no replacement for a Tom Wolfe, and his style, or a Hunter Thompson, and his style, or a Gay Talese, and his style. … We were the best magazine writers going in the 1960s. They should be better than us in the 1980s. Nobody is even half as good.”

Others blamed the absence of talented writers… more

To get the story right, we should read first Wolfe’s original story.

The Birth of ‘The New Journalism’, Eyewitness Report by Tom Wolfe

I. The Feature Game I doubt if many of the aces I will be extolling in this story went into journalism with the faintest notion of creating a «new» journalism, a «higher» journalism, or even a mildly improved variety. I know they never dreamed that anything they were going to write for newspapers or magazines would wreak such evil havoc in the literary world . . . causing panic, dethroning the novel as the number one literary genre, starting the first new direction in American literature in half a century . . . Nevertheless, that is what has happened. Bellow, Barth, Updike—even the best of the lot, Philip Roth—the novelists are all out there ransacking the literary histories and sweating it out, wondering where they now stand. Damn it all, Saul, the Huns have arrived. . .

God knows I didn’t have anything new in mind, much less anything literary, when I took my first newspaper job. I had a fierce and unnatural craving for something else entirely. Chicago, 1928, that was the general idea . . . Drunken reporters out on the ledge of the News peeing into the Chicago River at dawn . . . Nights down at the saloon listening to «Back of the Stockyards» being sung by a baritone who was only a lonely blind bulldyke with lumps of milk glass for eyes . . . Nights down at the detective bureau—it was always nighttime in my daydreams of the newspaper life. Reporters didn’t work during the day. I wanted the whole movie, nothing left out . . .

I was aware of what had reduced me to this Student Prince Maudlin state of mind. All the same, I couldn’t help it. I had just spent five years in graduate school, a statement that may mean nothing to people who never served such a stretch; it is the explanation, nonetheless. I’m not sure I can give you the remotest idea of what graduate school is like. Nobody ever has… more