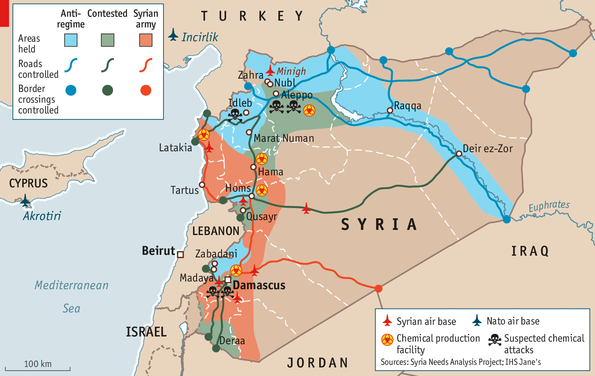 Although it is  most importante question, few well reasoned and documented answers han been published in the last few days, completely covered by the fog of another Western military attempt to punish the Assad regime for the use of chemical weapons on Aug 21, 2013.

The Economist is one exception. In Aug 29, it offered  some clues about what is going in the multiple, multidmensional multisectarial confrontations in the country:

AFTER Syria’s rebels were chased out of the town of Qusayr, near the border with north-east Lebanon, at the beginning of June, the momentum seemed to be turning in favour of President Bashar Assad’s forces. He was well on his way, said many observers, to consolidating a pro-regime axis running from Damascus, the capital, through the pivotal city of Homs, the third-largest in the country, down west to the ports of Tartus and Latakia, in the heartland of the president’s own minority Alawite community. Homs, it was confidently predicted by regime loyalists, would be cleared of rebels next, and Aleppo, the country’s long-contested second city, could soon be back wholly in government hands, too. Moreover, the rebels, especially those in the suburbs of Damascus, were finding it harder to keep their supply lines open, from Lebanon in the west and Jordan in the south. The regime might expect to secure all the key roads between all main cities of the western part of Syria, where most of the country’s people reside.

It has not quite happened like that. If anything, the momentum has edged back the other way. A chunk of Homs has remained under rebel control, albeit perilously. The road between Aleppo and Hama, en route to Damascus, has continued to be attacked and occasionally cut. Several places on the way, such as Marat Numan, in the north-west, are still dominated by rebels, who continue to strangle the provincial capital of Idleb and smaller towns such as Nubl and Zahra, near Aleppo. The towns of Zabadani and Madaya, just north of the main road between Damascus and Beirut, which the government is determined to maintain as an international land line, remain in rebel hands… MORE