Why Greece Will Cave—and How

Alexis Tsipras and the Debt Negotiations

Since the January 2015 election of a coalition government made up of the left-wing SYRIZA party and the right-wing ANEL (Independent Greeks) party, Greece has been in constant negotiation with the EU about reformulating the Greek bailout. Although Athens has often (but not always) denied it, any new deal will come with serious restrictions on the Greek people.

The negotiations are secret, but there are plenty of leaks on both sides. They traffic not in facts but in the impressions of people participating in, or close to, the talks. It is clear that the Greek government is relentlessly optimistic—it has been expecting an agreement “any day now” ever since the removal of Yanis Varoufakis, the Greek finance minister, from the chief negotiating position last month—whereas the rest of the EU cannot see striking a deal anytime soon.

In other words, the leaks and conflicting daily statements from participants offer little clarity about the real state of affairs. Beneath them, though, lie structural issues that imply the EU has the upper hand. In the negotiating game, the deck is stacked in the EU’s favor. In the Greek domestic game, it favors Greek Prime Minister Alexis Tsipras, who wants a compromise.

In any negotiation, the two parties have “reservation prices” (that is, the point at which a negotiator would rather forgo any agreement). Reservation prices depend on how beneficial the deal on the table is and how disruptive the alternative would be. Understanding that Greece represents only three percent of the EU’s GDP, an outside observer might believe that the EU’s reservation price is quite low—it would be willing to walk away from the talks much sooner than the Greeks. In turn, any agreement will be weighted this way. Yet there are some additional factors—one institutional and one substantive—that are important to note.

The EU’s institutional advantage is that decisions (in the Eurogroup and in the council) are made unanimously, which implies that it is very difficult for any proposal to be accepted. For example, the Treaty of Lisbon, which is the functional equivalent of an EU constitution, took a decade to be negotiated and adopted. In the negotiations game, unanimous decision-making works against the Greek government, given the difficulty of getting any of its proposals accepted.

The Greek government does not seem to understand this institutional feature of the EU. The government maintains that its position expresses the will of the Greek people and that it is thus entitled to impose its preferences (“tear up the memorandums”) on the EU or demand that the EU make at least 30 percent of the concessions to reach a compromise. Tsipras has repeatedly asked for private meetings with European leaders (German Chancellor Angela Merkel, European Commission President Jean-Claude Juncker, and European Central Bank [ECB] President Mario Draghi) to talk about a political solution. Yet time and time again, he is pushed back politely with the argument that the decision will be made by institutions—namely, the Eurogroup, or the “troika” of the International Monetary Fund (IMF), the European Commission, and the ECB. 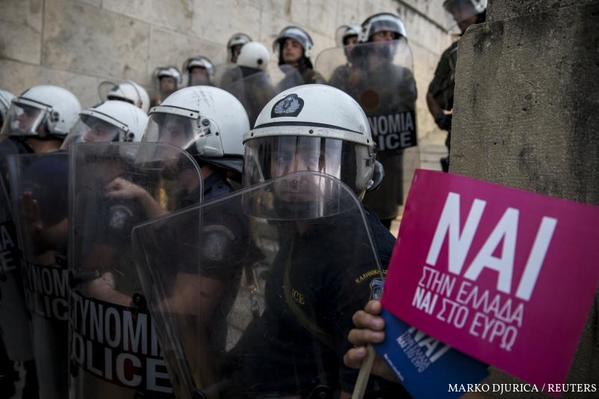