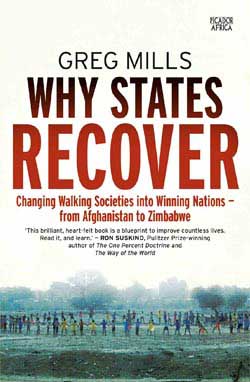 Why States Recover: Changing Walking Societies into Winning Nations, from Afghanistan to Ziimbabwe charts a sizeable review of twenty-eight case studies to argue for greater local ownership over development and a radical change to external intervention if underdeveloped and post-conflict states are to succeed. Drawing on observations from Afghanistan and Argentina, to Rwanda and Sierra Leone, Dr Greg Mills, a South African best known for his book Why Africa is Poor, locates the problems of underdevelopment largely in poor political leadership, the persistence of identity politics and the inability of donors to practice the mantra that context matters. While those familiar with academic treatments of the good governance agenda are unlikely to find anything new, Mills provides a persuasive – albeit contentious – argument for radically changing the work of development agencies if aid is to prove effective.

From the outset, Dr Mills boldly claims that, “countries can change for the better. But outsiders cannot fix state failure”. The concept of state failure is rightly critiqued for its lack of analytical utility and propensity for the art of blueprints, list making and PowerPoint presentations. But unusually, he goes further, arguing that more often than not the contradictory policy prescriptions used to treat state failure – that have been widely critiqued within more critical academic work – serve to justify the continued existence of the consultants and multilateral institutions purporting to be its remedy. “It’s not about Africa, it’s about Tony”, as Christopher Clapham has suggested. Mills specifically argues that external intervention so often fails because aid agencies continue to believe that bright, young generalists are more effective than specialists with a higher degree of contextual knowledge. Agreeing with Tory MP Rory Stewart that “our entire conceptual apparatus was mad … complete abstract madness”, Mills identifies local ownership over development processes as the critical issue glossed over in current development strategies.

However, the question of local ownership ends up as a tautology running throughout the book. A number of policy changes familiar to those cognisant with current debates on aid effectiveness are raised: resolving the root causes of social conflict following civil war; redressing rural-urban biases in public expenditure; encouraging decentralisation of fiscal authority; investment in infrastructure projects that offer economies of scale (despite recent criticism of Chinese policy) and measuring the outcomes of aid rather than just inputs. Yet the more complicated question of how to identify ‘good’ local ownership as opposed to the self-interested politics of ‘bad’ local ownership is left somewhat under-examined.

Drawing on the economic history of South Asia, recent research has suggested the answer lies in “going with the grain” of patrimonial authority in sub-Saharan Africa (Kelsall **). A high degree of political centralisation coupled with long-time horizons in investment strategy can be developmental and prevent wasting time, money and resources placating illiberal power structures wholesale. Mills, however, suggests such trends represent “the Asian authoritarianism excuse” and that instead a tougher approach should be taken to resist the rise of authoritarian leaders while maintaining liberal-democratic institutions as the end goal of development (p. 532, 556). Quoting Margaret Thatcher, Mills suggests political leadership in Africa should seek “people to make choices, not simply to seek lame consensus” (p 616). This begs two questions. How are political leaders to be made responsible in the absence of external intervention or sanction? And second, how can a citizenry own their country’s future if they do not own the political choices available to them? Without reference as to the role of civil society, Mills concedes, that good political leadership requires “far-reaching, sometimes painful domestic changes” (p. 631).