A couple of weeks ago, Times editor John Witherow (I can’t preface his title with «acting» any longer) could be found in London‘s Brompton Cemetery with several of his staff to attend the gravestone restoration of one of the paper’s greatest reporters – William Howard Russell. 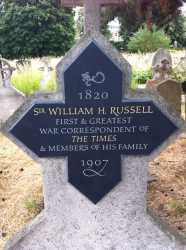 Regarded as the father of war reporting, it was Russell who revealed the awful conditions suffered by British soldiers in the Crimea in 1854.

He went on to report on the battle of Balaclava – writing a descriptive piece that led to the coining of the phrase «the thin red line» – and also witnessed the ill-fated charge of the light brigade.

He later covered the Indian mutiny, the American civil war and the Franco-Prussian war. Though his Crimea reporting upset Queen Victoria, he was eventually knighted by her son, Edward VII…

The Times celebrates one of its greatest journalists

Parenting on the frontline: when the war correspondent became a mother