Bob Woodward, who has been engaged in a fight with the White House over blame for the sequester, on Wednesday, Feb 27, 2013,  called the administration’s decision not to send the aircraft carrier Truman to the Persian Gulf because of looming defense spending cuts a «kind of madness.» (TPMLIVEWIRE)

On Feb 27, 2013, Susan Heavy published in Reuters he best version I’ve seen on the confrontation between the famous investigative reporter and the Obama White House. Under the title Bob Woodward says White House told him he would regret criticism, she opened her report with Woodward’s explanation and the White House decision not to comment after the interview of the Washington Post reporter with CNN’s Wolf Blitzer:

Journalist Bob Woodward on Wednesday said a senior White House official told him he would «regret» taking issue in recent days with President Barack Obama’s version of how across-the-board budget cuts came to be.

Woodward, who challenged the White House account in an article on Sunday, said a «very senior» White House official sent him an email in which, «It was said very clearly, ‘You will regret doing this.'» 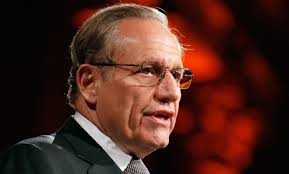 Earlier the same day,  Woodward had criticized Barack Obama’s handling of the cuts set to take effect in the followind days, calling the president’s decision to hold back on military deployments «madness«.

His comments continued what has become a running dispute between Woodward, perhaps the country’s best-known print journalist, and the Democratic White House about who is responsible for the across-the-board cuts scheduled to begin on Friday.

The week before Woodward had published  an opinion piece in the Washington Post, where he still is associate editor, saying the administration was «wrong» to blame the cuts on Republicans.

Woodward ended his article attacking the flotation line of Obama’s defense in the so-called sequestration debate:

In fact, the final deal reached between Vice President Biden and Senate Minority Leader Mitch McConnell (R-Ky.) in 2011 included an agreement that there would be no tax increases in the sequester in exchange for what the president was insisting on: an agreement that the nation’s debt ceiling would be increased for 18 months, so Obama would not have to go through another such negotiation in 2012, when he was running for reelection.

So when the president asks that a substitute for the sequester include not just spending cuts but also new revenue, he is moving the goal posts. His call for a balanced approach is reasonable, and he makes a strong case that those in the top income brackets could and should pay more. But that was not the deal he made.