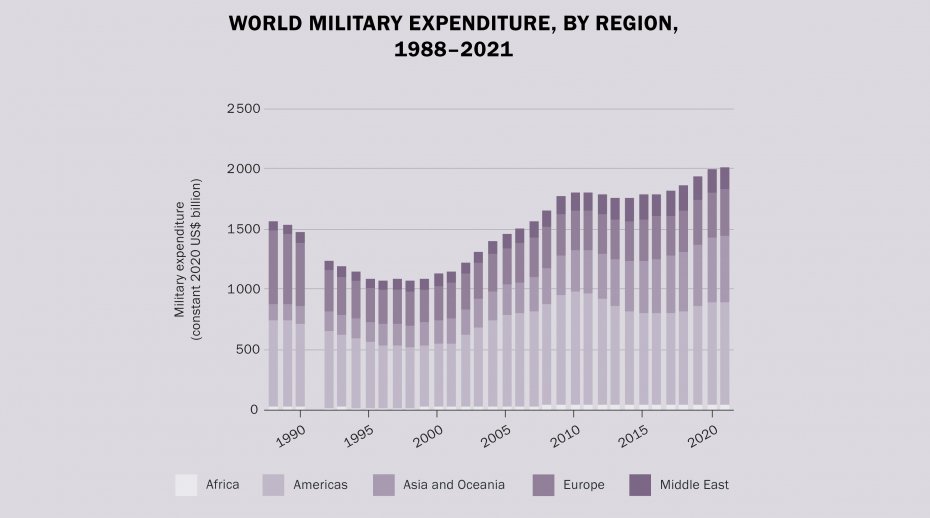 Stockholm, 25 April 2022) Total global military expenditure increased by 0.7 per cent in real terms in 2021, to reach $2113 billion. The five largest spenders in 2021 were the United States, China, India, the United Kingdom and Russia, together accounting for 62 per cent of expenditure, according to new data on global military spending published today by the Stockholm International Peace Research Institute (SIPRI).

World military spending continued to grow in 2021, reaching an all-time high of $2.1 trillion. This was the seventh consecutive year that spending increased.

‘Even amid the economic fallout of the Covid-19 pandemic, world military spending hit record levels,’ said Dr Diego Lopes da Silva, Senior Researcher with SIPRI’s Military Expenditure and Arms Production Programme. ‘There was a slowdown in the rate of real-terms growth due to inflation. In nominal terms, however, military spending grew by 6.1 per cent.’

As a result of a sharp economic recovery in 2021, the global military burden—world military expenditure as a share of world gross domestic product (GDP)—fell by 0.1 percentage points, from 2.3 per cent in 2020 to 2.2 per cent in 2021.

‘The increase in R&D spending over the decade 2012–21 suggests that the United States is focusing more on next-generation technologies,’ said Alexandra Marksteiner, Researcher with SIPRI’s Military Expenditure and Arms Production Programme. ‘The US Government has repeatedly stressed the need to preserve the US military’s technological edge over strategic competitors.’