Here, there and everywhere. Youth unemployment has become a generalized malaise in most developed countries in the last decade. There are exceptions, of course, if only to confirm the rule. Among the rarae aves of the rich planet, Germany and Japan are the best off, Britain is nearly as well (or bad, it all depends how we read the figures) and the U.S. is falling far behind the pack. The map changes drastically when we add the European southern countries, with Spain and Greece breaking all records, but their misfortune is bad consolation for the luminaries.

David Leonhardt seemed to agree with this view in his piece for The New York Times on May 3, 2013. (*)

For all of Europe’s troubles — a left-right combination of sclerotic labor markets and austerity — the United States has quietly surpassed much of Europe in the percentage of young adults without jobs. It’s not just Europe, either. Over the last 12 years, the United States has gone from having the highest share of employed 25- to 34-year-olds among large, wealthy economies to having among the lowest.

The grim shift — “a historic turnaround,” says Robert A. Moffitt, a Johns Hopkins University economist — stems from two underappreciated aspects of our long economic slump. First, it has exacted the harshest toll on the young — even harsher than on people in their 50s and 60s, who have also suffered. And while the American economy has come back more robustly than some of its global rivals in terms of overall production, the recovery has been strangely light on new jobs, even after Friday’s better-than-expected unemployment report. American companies are doing more with less… more

On April 27th The Economist addressed the challenge from a global perspective, region by region. After summarizing the main data offered today by OECD, the World Bank, Eurostat and academic researchers, it advanced in the front section Leaders other clues.

Official figures assembled by the International Labour Organisation say that 75m young people are unemployed, or 6% of all 15- to 24-year-olds. But going by youth inactivity, which includes all those who are neither in work nor education, things look even worse. The OECD, an intergovernmental think-tank, counts 26m young people in the rich world as “NEETS”: not in employment, education or training. A World Bank database compiled from households shows more than 260m young people in developing economies are similarly “inactive”. The Economist calculates that, all told, almost 290m are neither working nor studying: almost a quarter of the planet’s youth (see chart one) 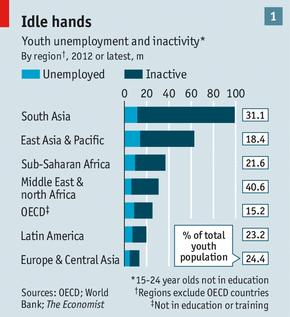 Young people have long had a raw deal in the labour market. Two things make the problem more pressing now. The financial crisis and its aftermath had an unusually big effect on them. Many employers sack the newest hires first, so a recession raises youth joblessness disproportionately. In Greece and Spain over a sixth of the young population are without a job (see chart two). The number of young people out of work in the OECD is almost a third higher than in 2007.

Second, the emerging economies that have the largest and fastest-growing populations of young people also have the worst-run labour markets. Almost half of the world’s young people live in South Asia, the Middle East and Africa. They also have the highest share of young people out of work or in the informal sector. The population of 15- to 24-year-olds in Africa is expected to rise by more than a third, to 275m, by 2025… more

Among the worst consequences of the challenge, I’d highlight, following The Economist’s report and the Spanish experience in the last six years, a heavy burden on diminishing taxpayers and social security reserves, a fall in production capacity and equality of opportunities, an increase in the precariousness of millions, the delegitimization of  economic and political leaders and parties, the radicalization of those supporting the heaviest burdens and, as a result, the weakening of democracies.

In long established ones, that may sound as a minor evil. For the youngest ones, born between the mid seventies (Southern Europe) and the late nineties (Eastern Europe), the danger should be taken much more seriously.

After nearly killing the sick with austerity  prescription that has dried consumption and liquidity in the markets for too long, international organizations like the IMF and the UE are starting to wake up to reality and looking with different eyes the graphics, charts, hypothesis, absorption and some conceit so abundant in the likes of Rogoff, Reinhart and other gurus, now toning down their previous fundamentalist positions. Are we on time to resurrect the moribund? Let’s hope so.

Jobs, Wages and the Sequester The New York Times Editorial. May 3, 2013.