Today, Mark Zuckerberg spoke at Georgetown University about the importance of protecting free expression. He underscored his belief that giving everyone a voice empowers the powerless and pushes society to be better over time — a belief that’s at the core of Facebook.

In front of hundreds of students at the school’s Gaston Hall, Mark warned that we’re increasingly seeing laws and regulations around the world that undermine free expression and human rights. He argued that in order to make sure people can continue to have a voice, we should: 1) write policy that helps the values of voice and expression triumph around the world, 2) fend off the urge to define speech we don’t like as dangerous, and 3) build new institutions so companies like Facebook aren’t making so many important decisions about speech on our own.

Standing For Voice and Free Expression

Hey everyone. It’s great to be here at Georgetown with all of you today.

Before we get started, I want to acknowledge that today we lost an icon, Elijah Cummings. He was a powerful voice for equality, social progress and bringing people together.

When I was in college, our country had just gone to war in Iraq. The mood on campus was disbelief. It felt like we were acting without hearing a lot of important perspectives. The toll on soldiers, families and our national psyche was severe, and most of us felt powerless to stop it. I remember feeling that if more people had a voice to share their experiences, maybe things would have gone differently. Those early years shaped my belief that giving everyone a voice empowers the powerless and pushes society to be better over time.

Back then, I was building an early version of Facebook for my community, and I got to see my beliefs play out at smaller scale. When students got to express who they were and what mattered to them, they organized more social events, started more businesses, and even challenged some established ways of doing things on campus. It taught me that while the world’s attention focuses on major events and institutions, the bigger story is that most progress in our lives comes from regular people having more of a voice.

Since then, I’ve focused on building services to do two things: give people voice, and bring people together. These two simple ideas — voice and inclusion — go hand in hand. We’ve seen this throughout history, even if it doesn’t feel that way today. More people being able to share their perspectives has always been necessary to build a more inclusive society. And our mutual commitment to each other — that we hold each others’ right to express our views and be heard above our own desire to always get the outcomes we want — is how we make progress together.

But this view is increasingly being challenged. Some people believe giving more people a voice is driving division rather than bringing us together. More people across the spectrum believe that achieving the political outcomes they think matter is more important than every person having a voice. I think that’s dangerous. Today I want to talk about why, and some important choices we face around free expression.

Throughout history, we’ve seen how being able to use your voice helps people come together. We’ve seen this in the civil rights movement. Frederick Douglass once called free expression “the great moral renovator of society”. He said “slavery cannot tolerate free speech”. Civil rights leaders argued time and again that their protests were protected free expression, and one noted: “nearly all the cases involving the civil rights movement were decided on First Amendment grounds”.

Guy Verhofstadt✔@guyverhofstadt
Very worrying to see that Zuckerberg is refusing to learn from past mistakes. Facebook remains a threat to our democracy under such leadership. https://twitter.com/cspan/status/1187098428737753091 …  CSPAN✔@cspan 12:43 PM – Oct 24, 2019

«So, you won’t take down lies or you will take down lies? I think that’s just a pretty simple yes or no.»
Complete exchange between @RepAOC @AOC and Mark Zuckerberg at today’s House Financial Services Cmte hearing.
Full video here: https://cs.pn/2W2BqB2 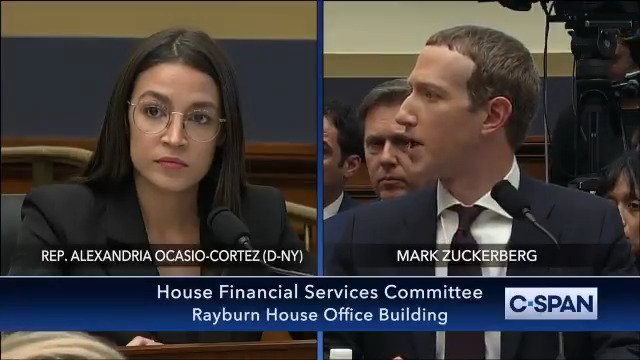