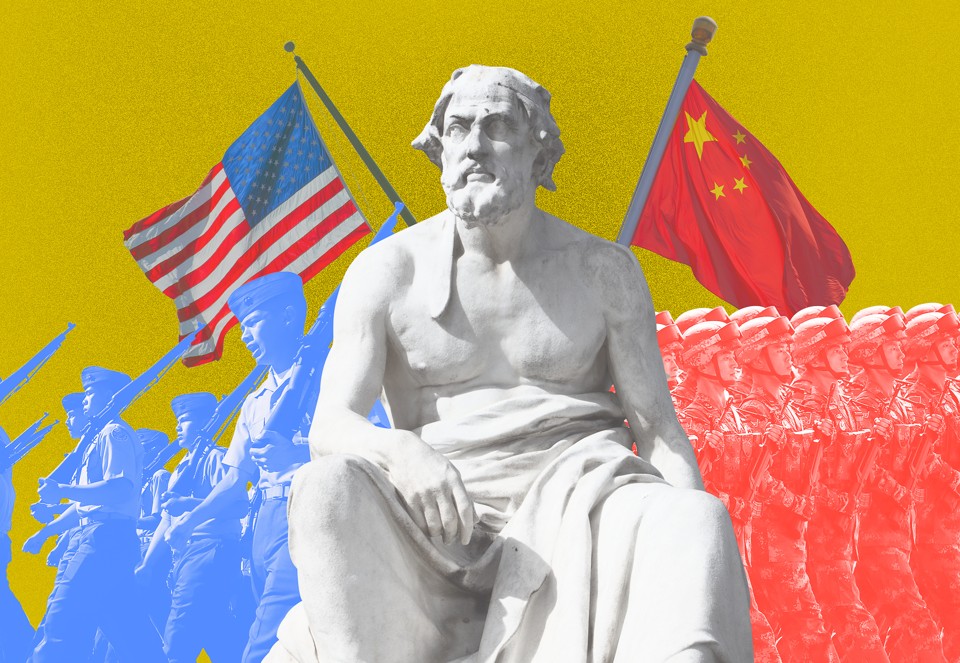 In which Graham Allison codes the Cold War as a better outcome of power transition than the Crimea War http://www.theatlantic.com/international/archive/2015/09/united-states-china-war-thucydides-trap/406756/ … 4:46 PM – 25 Sep 2015

The Thucydides Trap: Are the U.S. and China Headed for War?

In 12 of 16 past cases in which a rising power confronted a ruling power, the result was bloodshed.

Are the U.S. and China Headed for War?

In 12 of 16 past cases in which a rising power has confronted a ruling power, the result has been bloodshed

When Barack Obama meets this week with Xi Jinping during the Chinese president’s first state visit to America, one item probably won’t be on their agenda: the possibility that the United States and China could find themselves at war in the next decade. In policy circles, this appears as unlikely as it would be unwise.And yet 100 years on, World War I offers a sobering reminder of man’s capacity for folly. When we say that war is “inconceivable,” is this a statement about what is possible in the world—or only about what our limited minds can conceive? In 1914, few could imagine slaughter on a scale that demanded a new category: world war. When war ended four years later, Europe lay in ruins: the kaiser gone, the Austro-Hungarian Empire dissolved, the Russian tsar overthrown by the Bolsheviks, France bled for a generation, and England shorn of its youth and treasure. A millennium in which Europe had been the political center of the world came to a crashing halt.The defining question about global order for this generation is whether China and the United States can escape Thucydides’s Trap. The Greek historian’s metaphor reminds us of the attendant dangers when a rising power rivals a ruling power—as Athens challenged Sparta in ancient Greece, or as Germany did Britain a century ago. Most such contests have ended badly, often for both nations, a team of mine at the Harvard Belfer Center for Science and International Affairs has concluded after analyzing the historical record. In 12 of 16 cases over the past 500 years, the result was war. When the parties avoided war, it required huge, painful adjustments in attitudes and actions on the part not just of the challenger but also the challenged.

Based on the current trajectory, war between the United States and China in the decades ahead is not just possible, but much more likely than recognized at the moment. Indeed, judging by the historical record, war is more likely than not. Moreover, current underestimations and misapprehensions of the hazards inherent in the U.S.-China relationship contribute greatly to those hazards. A risk associated with Thucydides’s Trap is that business as usual—not just an unexpected, extraordinary event—can trigger large-scale conflict. When a rising power is threatening to displace a ruling power, standard crises that would otherwise be contained, like the assassination of an archduke in 1914, can initiate a cascade of reactions that, in turn, produce outcomes none of the parties would otherwise have chosen.

War, however, is not inevitable. Four of the 16 cases in our review did not end in bloodshed. Those successes, as well as the failures, offer pertinent lessons for today’s world leaders. Escaping the Trap requires tremendous effort. As Xi Jinping himself said during a visit to Seattle on Tuesday, “There is no such thing as the so-called Thucydides Trap in the world. But should major countries time and again make the mistakes of strategic miscalculation, they might create such traps for themselves.”

More than 2,400 years ago, the Athenian historian Thucydides offered a powerful insight: “It was the rise of Athens, and the fear that this inspired in Sparta, that made war inevitable.” Others identified an array of contributing causes of the Peloponnesian War. But Thucydides went to the heart of the matter, focusing on the inexorable, structural stress caused by a rapid shift in the balance of power between two rivals. Note that Thucydides identified two key drivers of this dynamic: the rising power’s growing entitlement, sense of its importance, and demand for greater say and sway, on the one hand, and the fear, insecurity, and determination to defend the status quo this engenders in the established power, on the other.