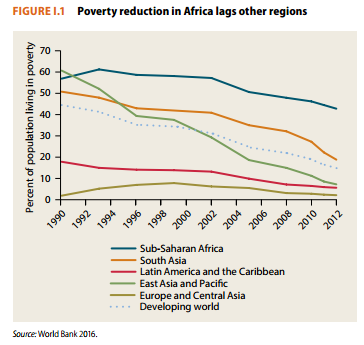 Unless governments do more to improve the quality of jobs, the UN’s goal of ending poverty by 2030 will not be met, a new report by the International Labour Organisation (ILO) finds.

While significant progress has been made, the ILO’s World Employment Social Outlook report for 2016 warns that without investment in the creation of quality jobs that provide better social protection such as health and welfare benefits it will not be possible to reduce poverty in a lasting way.

What will it take to end poverty?

Extreme poverty rates have halved since 1990, when initial international commitments to reduce poverty were undertaken.

Nearly 2 billion people – around 36% of the emerging and developing world’s population – live on less than the “moderate poverty threshold” of $3.90 a day. Currently though, many of the world’s poor have jobs: they’re just badly paid, in low-skilled occupations, and without basic social protections.

The UN’s Sustainable Development Goals (SDGs), adopted in September 2015, include ending poverty in all its forms everywhere by 2030.

To achieve this goal, incomes would need to increase to at least $3.10 per day, which would cost a total of $10trn by 2030, the ILO report says.

Globalization has created wealth – but for whom?

Can Africa eliminate poverty by 2030?