DESPITE greatly improved financial conditions over the past nine months following the pledge by Mario Draghi, head of the European Central Bank, to do “whatever it takes” to save the single currency, the euro area remains mired in recession. Output declined by 0.2% in the first three months of 2013 from its level late last year, the sixth consecutive quarter of a recession that started in late 2011. GDP rose by just 0.1% in Germany, the biggest economy in the euro area and declined by 0.2% in France, the second biggest. Falls in southern Europe were much bigger, with GDP declining by 0.5% in Italy and Spain and 1.3% in Cyprus.

Forecasts from the European Commission in early May showed annual euro-zone GDP shrinking by 0.4% in 2013, following a contraction of 0.6% in 2012. The economic reverse will be much deeper on the periphery of the single-currency club than in its core. Cyprus will take over from Greece as the worst performer this year as its GDP shrinks by 8.7% (a prediction that could well prove optimistic). The Baltic states will continue to shine. The economy tipped to prosper the most within the 17-country euro area is Estonia’s, whose GDP will rise by 3% in 2013. Within the 27-nation European Union (EU), Latvia which is expected to join the euro next January will be the star performer, with its GDP increasing by 3.8%… More from the Economist.com. May 15th 2013, 14:28

ACCORDING to Eurostat’s first estimate, output in the euro area shrank 0.2% from the fourth quarter of 2012 to the first of 2013 and fell 1% year-on-year. The euro zone has been in recession since the third quarter of 2011. Today’s Daily chart is an updated interactive graphic on the European economy. For a bit more context, I thought I’d add two charts of my own. Here is real GDP for a selection of economies: 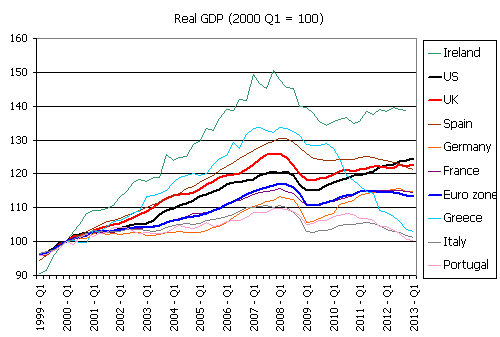 And here is real per capita GDP for the same countries: 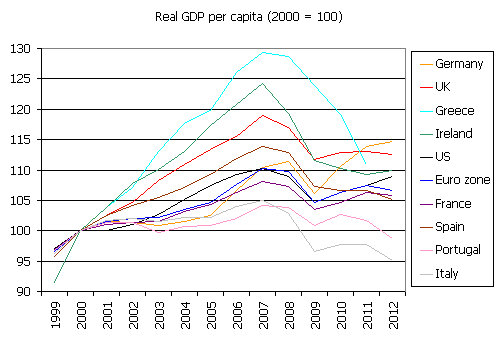 The charts show the whole of the euro era, and it has not been a particularly glorious time. Indeed, most of the euro area would have been better off being Britain or America over this time, even in per capita terms, and Britain and America have hardly had outstanding performances. The remarkable thing to me is that no euro-area economy is rushing for the exit, despite the fact that real output per person has fallen 15% in Greece and is lower in Italy and Portugal than it was 13 years ago. Perhaps the periphery imagines that they would have done worse without the euro. Or maybe, as Karl Smith says, the euro is only capable of causing such misery because no one is willing to abandon it. (May 15th, 2013,  17:35 by R.A. | WASHINGTON)