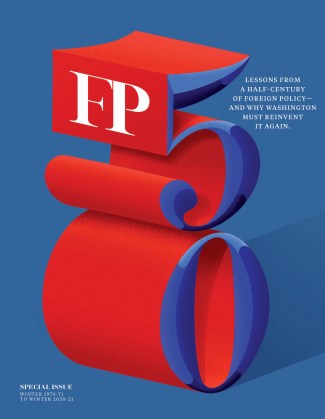 America and the World: How to Build Back Better.

Looking back on 50 years of U.S. foreign policy and the lessons they hold for Washington today.

To mark the occasion of Foreign Policy’s 50th birthday, FP’s Jonathan Tepperman sat down recently with Fareed Zakaria—the author, CNN host, and one of today’s leading thinkers on international affairs—to discuss the moment of the magazine’s creation, the many similarities between then and now, what the last 50 years have taught us about U.S. strategy, and where the country should go from here. The following conversation has been edited for clarity and concision.

Jonathan Tepperman: Foreign Policy was founded as a journal in the winter of 1970-1971. Reading through the first issue today, one can’t help but be struck by the parallels to the present moment. In that issue’s introduction, FP’s founders, Samuel P. Huntington and Warren Demian Manshel, write about how “an era in American foreign policy, which began in the late 1940’s, has ended” and then go on to say they “think this is a good time for new—and … more constructive—controversies concerning the revision of goals, the reconsideration of means, and the reformulation of the responsibilities of the United States in a world which is rapidly reformulating itself.”

The backdrop for their writing, which they allude to, is the crumbling of what had been the key U.S. foreign policy of the postwar era, namely containment—the effort to hem in the Soviet Union—and the need to build a new consensus around a new approach.

That first issue also reveals a lot of other important things about the early 1970s. The United States was being rocked by new and confusing forces and had lost its nerve; the mood was grim. Graham Allison wrote in the issue that “we have already entered the twilight zone of American political and military influence in the world.” In other words, 50 years ago, FP’s writers were already preoccupied by the idea that the United States was in decline and that Washington’s whole strategy for dealing with the rest of the world no longer worked and had to be reinvented. Everything was up for grabs, and FP’s task was to create a new foreign-policy consensus and a new foreign-policy establishment. Doesn’t that sound a lot like today?

Fareed Zakaria: It’s an intriguing parallel. It reminds me of that old saying sometimes attributed to Mark Twain, “History never repeats itself, but it rhymes.” This feels like one of those rhyming moments.

The primary reason Foreign Policy was founded was because of the failure of U.S. policy in Vietnam and the establishment’s failure to have a really robust conversation about that failure.

You have to remember what a big deal Vietnam was—the failure was much more dramatic than people realize today. Over the course of the war, the United States sent 3 million troops to Vietnam. It dropped more bombs there than it did during World War II. It was a massive expenditure of American power and prestige. And it triggered a massive political crisis, destroying Lyndon B. Johnson’s presidency, which until then had been the most successful presidency since Franklin D. Roosevelt’s.

You also had the end of the Bretton Woods system, under which the United States had essentially guaranteed an international economic order that was backed by the dollar, which was backed by gold. You were seeing the end of a process in which the United States had been encouraging the rise of Western Europe and East Asia but on highly asymmetrical terms—helping them with aid, market access, and a defense umbrella. The United States had opened its markets with no fear that it would face any real competition, but by the 1970s, that era of unrivaled supremacy was beginning to end. By the time Foreign Policy was founded, Western Europe had been growing robustly for 30 years and Japan for 20. South Korea was also becoming a real industrial competitor. So all of a sudden, the United States was seeing global competition. It saw itself being buffeted by a series of global forces that it couldn’t control.

That feeling is somewhat familiar today, in two senses. One, there is a sense that the post-Cold War order, which had essentially been American unipolarity, is no longer sustainable, primarily because of the rise of China. And the second is that globalization, which has produced enormous benefits for the U.S. economy as a whole and for America’s large companies, has now also produced real fissures within American society because of the sharply unequal way those benefits have been distributed. And all these problems contributed, then as now, to a feeling that democracy itself was in crisis.

So you have the “shock of the global,” as the editors of a book on the 1970s called it. We have something very similar today.

JT: In his introduction to that book, The Shock of the Global, the historian Niall Ferguson writes that the most destabilizing aspect of the 1970s was the opening up of so many different areas—finance, trade, decolonization, the fracturing of the communist bloc—at the same time. The result was an enormous and alarming increase in the fragility of the global system, which suddenly became much more prone to crisis.

FZ: Exactly. The ’70s represented globalization 1.0. It broke the Bretton Woods system. It broke the comfortable monopoly the United States had enjoyed over manufacturing. It broke America’s ability to simply impose its foreign policy across the globe.

Today, the shock of the global is coming from a kind of globalization 2.0, in which a whole slew of other nations are rising—mainly China but also India, Indonesia, Brazil, and Turkey—and in which everyone is connected but no one is in control. Another American era is ending, and we have to navigate the new system without the road maps of the past. Incidentally, these global pressures often have the effect of creating divides and dysfunctions at home. Then, as now, people talked about a crisis of democracy because Western democracies seemed unable to cope with the challenges of the moment.

JT: Just as with the end of Bretton Woods, so today interdependence is increasing dramatically at the same moment that the guardrails have fallen off. U.S. hegemony is declining, international institutions are weakening, everything is becoming more chaotic, and there’s no system for guidance or control.

But one important thing that happened in the 1970s that I don’t see happening today is an intensely energetic response to the failures on the foreign-policy side. The founding of Foreign Policy was very much a part of this response, as American thinkers started trying to craft a whole new set of doctrines to guide the United States into this new era. As the author Carl Gershman argued in Commentary magazine in 1980, containment failed so badly that not only was the doctrine discredited, he thought, but so was the whole generation of experts who had developed and promoted it.

To replace it, a whole new foreign-policy establishment began to coalesce in the 1970s, pitching all sorts of radical new ideas about how the United States should handle international affairs. I’m talking about people like Anthony Lake, Leslie H. Gelb, Paul Warnke, Richard Holbrooke, and Zbigniew Brzezinski. And they kicked off a period of tremendous productive debate—much of it conducted in the pages of Foreign Policy. I’m not sure I see something similar happening today.

FZ: Vietnam broke the back of the Democratic establishment, which really had been the governing establishment of the United States from 1932 until 1968. (The only Republican president in that period was FDR’s favorite battlefield general, Dwight Eisenhower.) And that fracture occasioned exactly what you described: a massive outpouring of doubt and reconsideration. But remember what then happened: The person who got elected in 1980, Ronald Reagan, basically returned to a hard-line version of the same containment policy that had dominated the earlier decades, and in applying it to the Soviet Union, minus interventions in so-called Third World countries, he succeeded. By 1991, the Soviet Union had collapsed, and that process of ending the Cold War was engineered by President George H.W. Bush and his team, who represented, in a sense, a new Republican internationalist establishment that had taken over from the old Democratic one—after imbibing most of its views and values. This was a big shift. The original Republican establishment of the 1940s and 1950s was filled with dedicated isolationists or crazy hawks calling for rollback abroad and witch hunts at home. But starting with Henry Kissinger, you saw the emergence of a skillful, internationalist, free-trading foreign-policy elite on the Republican side that dominated the 1980s and early 1990s.

JT: So did the liberal ideas dreamed up by the early writers of Foreign Policy get lost in the process? Look at what happened during the Jimmy Carter administration. The progressives finally get their paladin in the White House, who would inject values such as human rights into U.S. foreign policy for the first time and wouldn’t be constrained by fear of the Soviet Union. But then everything immediately fell apart, and by the end of the Carter administration, the Soviets had invaded Afghanistan, and Brzezinski was pushing for a restoration of containment.

FZ: The liberal dreams do crumble with Carter—partly because of his own ineptitude but mostly because of events that were beyond his control: the aftereffects of the defeat in Vietnam, the second oil shock, stagflation, Afghanistan, and the Iranian revolution and the subsequent hostage crisis. He was dealt a tough hand. And in response to these failures, Americans elect Reagan, and those dreams of a virtuous foreign policy go away—although Carter’s emphasis on human rights does endure. And there are other continuities. I always think of George H.W. Bush as basically a liberal internationalist in the Harry Truman mold. People forget now, but Bush was the one who popularized the phrase “new world order” in a speech after the fall of the Berlin Wall. What he meant was that the United States was entering a whole new era in which great-power cooperation, multilateralism, and international norms would be much more important. He envisioned a world after the Cold War that was similar to the one envisioned by FDR after World War II. It’s a quintessentially American idealism: not to simply engage in international politics but to transform it.

But one of the forces that held Bush back from really pushing this vision—and people forget this—is how broke Americans thought they were after the end of the Cold War. In his inaugural address, Bush said, “We have more will than wallet.” The implication was that the United States may have wanted to reshape the world but it couldn’t afford to. This wasn’t really true. But it limited the ability of the United States to effect a transformation of the international system at a time when it strode the world like a colossus.

A New Pivot to Asia

The Rise and Fall and Rise (and Fall) of the U.S. Financial Empire

The Case for a Middle Path in U.S. Foreign Policy

America Abandoned Its Economic Prophet. The World Embraced Him