Published by the Center for Media Freedom and Responsibility
CMFR produced a monograph report on the issues of journalists’ safety, from the perspective of owners/their representatives. The report included discussions on how the owners see their responsibilities and their capacity to provide protection, the problems and what they perceive to be…MORE

Inside a bullet-worn airsoft arena in August, I led 15 journalists and activists at gunpoint through a labyrinth of graffitied walls and into a small, cramped enclave. There, they were ordered to stand with their palms against the wall; and if they didn’t comply, I was ordered to shove them with my gun. I’ll admit that I’m a small woman with negligible upper body strength. But in that moment, I was an aggressor establishing a hostile ambience; and I found myself shouting orders, cursing, grabbing their wrists, and outright threatening the journalists. “That’s a darling watch,” I sneered at one woman. “I’m sure my boss’s wife will love it.”

I dished out arbitrary punishments (“Kneel! You there: Stand with your arms in the air!”) and questioned the hostages (“You work for an education organization? That’s funny—your friend here said she writes.”). One wrong look, or even one look at all, and these people would be blindfolded and escorted to another smaller, louder room by an actual ex-army black belt. You think that’s scary? Imagine knowing that, once make-believe is over, you’ll really be in Afghanistan and the gun to your back won’t be a prop.

The journalists and activists were participants in one of Frank Smyth’s Global Journalist Security training courses. Founded in 2011, GJS integrates the “physical, digital, and emotional aspects of self-protection.” Smyth, its founder, is a seasoned journalist (and a senior adviser at the Committee to Protect Journalists) who has covered conflict in El Salvador, Guatemala, Cuba, Colombia, Rwanda, Sudan, Jordan, and Iraq, where he was imprisoned for 18 days in 1991. He also wrote the Dart Center’s and CPJ’s main security guides.. MORE 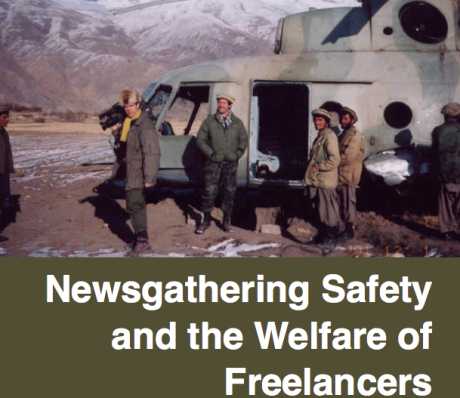 Register launched to represent freelances who report on conflicts

The Frontline Club has launched the Frontline Freelance Register, a body that aims to represent freelance journalists who put themselves at risk to report on conflicts.

The FFR’s core objective is to support the physical and mental well-being of freelancers in a media environment where staff jobs and fully-funded foreign assignments are increasingly scarce.

However, most freelancers lack the kind of institutional support and financial security enjoyed by staff journalists on newspapers, TV and radio stations.

They also lack the kind of organised representation necessary to deal with powerful media groups. So FFR has been founded in order to provide a forum to help freelancers

According to its mission statement, the FFR «aims to ensure its members observe responsible news gathering standards consistent with industry-established safety standards.» It continues:

«During the six months following its launch, the FFR aims to build a community of independent journalists, establishing a voice for them by working with journalist support organisations, industry figures and those with an interest in safety and security to support its members and champion safety and professional practice.» …MORE