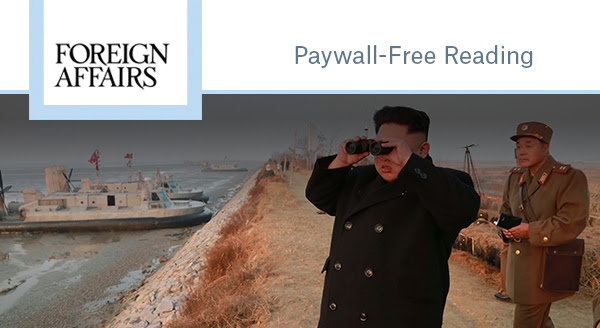 By Mira Rapp-Hooper and Robert Jervis

Give context to developments on the Korean Peninsula with a paywall-free version of Mira Rapp-Hooper and Robert Jervis’ article on U.S.-North Korea relations. The authors argue that perceptual challenges between the two states have hampered diplomacy in the past, and will continue to moving forward. We hope you enjoy reading, sharing, and discussing this paywall-free version of the article with your community.

North Korea has all but completed its quest for nuclear weapons. It has demonstrated its ability to produce boosted-fission bombs and may be able to make fusion ones, as well. It can likely miniaturize them to fit atop a missile. And it will soon be able to deliver this payload to the continental United States. North Korea’s leader, Kim Jong Un, has declared his country’s nuclear deterrent complete and, despite his willingness to meet with U.S. President Donald Trump, is unlikely to give it up. Yet Washington continues to demand that Pyongyang relinquish the nuclear weapons it already has, and the Trump administration has pledged that the North Korean regime will never acquire a nuclear missile that can hit the United States. The result is a new, more dangerous phase in the U.S.–North Korean relationship: a high-stakes nuclear standoff.

In March, U.S. and South Korean officials announced the possibility of a Kim-Trump meeting. But regardless of whether diplomacy proceeds or the United States turns its focus to other tools—sanctions, deterrence, even military force—the same underlying challenge will remain: the outcome of this standoff will be determined by whether and how each country can influence the other. That, in turn, will depend on the beliefs and perceptions each holds about the other. The problems of perception and misperception afflict all policymakers that deal with foreign adversaries. But when it comes to relations between Washington and Pyongyang, those problems are especially profound, and the consequences of a miscalculation are uniquely grave.

Any U.S. strategy toward North Korea involves using a combination of threats and promises to persuade Pyongyang to bend to Washington’s will. But whether the United States can actually persuade Pyongyang depends not just on which tools it chooses to use but also, more fundamentally, on how it is viewed by North Korea. How do North Korean leaders interpret the signals Washington sends? Do they see Washington’s threats and promises as credible? And how do U.S. policymakers perceive their counterparts in Pyongyang? How do they differentiate plausible threats from mere bluster?