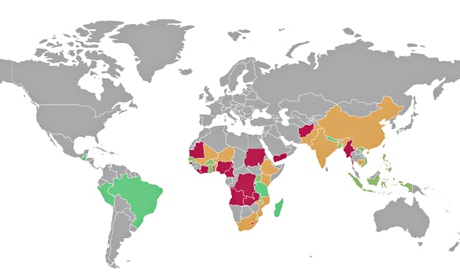 Hanci 2013 ranks governments according to commitment: green is high or moderate, orange is low and red is very low. Photograph: Institute of Development Studies (Source: The Guardian July 3, 2014)

Some of the world’s poorest countries are taking significant strides in addressing undernutrition and hunger, according to new evidence from the hunger and nutrition commitment index (Hanci) 2013. Burundi and Liberia are among the countries that have strengthened their commitment to action to reduce chronic hunger and undernutrition.

Findings from Hanci, launched on 25 June, show that in some countries, where there has previously been little action on these issues, significant efforts are now being made, including putting in place new laws and policies and increasing public investment. Burundi, for example, has improved access to clean water and sanitation and increased agricultural spending – significant improvements in a country with a hunger status of «extremely alarming», according to the global hunger index.

Hanci measures political commitment to reducing hunger and undernutrition in 45 high-burden developing countries, and compares their policies, laws and spending efforts. Where hunger is the result of an empty stomach, undernutrition is caused by multiple factors including poor diversity of food, lack of clean water and sanitation, inadequate feeding practices for infants and young children, and unavailability of healthcare. Therefore, government interventions must address both hunger and undernutrition, and commitment to tackling one does not necessarily automatically translate into tackling the other… MORE