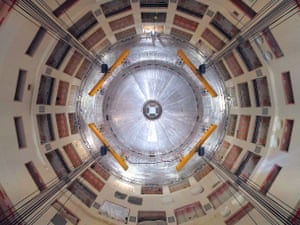 The first piece of the Iter tokamak being lowered into place. The entire reactor will weight 23,000 tonnes. Photograph: EJF Riche/Iter v @guardian

The world’s largest nuclear fusion project began its five-year assembly phase on Tuesday in southern France, with the first ultra-hot plasma expected to be generated in late 2025.

The €20bn (£18.2bn) Iter project will replicate the reactions that power the sun and is intended to demonstrate fusion power can be generated on a commercial scale. Nuclear fusion promises clean, unlimited power but, despite 60 years of research, it has yet to overcome the technical challenges of harnessing such extreme amounts of energy.

Millions of components will be used to assemble the giant reactor, which will weigh 23,000 tonnes and the project is the most complex engineering endeavour in history. Almost 3,000 tonnes of superconducting magnets, some heavier than a jumbo jet, will be connected by 200km of superconducting cables, all kept at -269C by the world’s largest cryogenic plant.

After 60 years, is nuclear fusion finally poised to deliver?